And about the ninth hour Jesus cried with a loud voice, saying: "Eli, Eli, lama sabachthani?" (That is to say: "My God, my God, why hast thou forsaken me?") 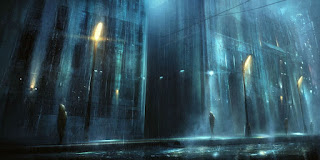 There were no clouds to be seen on the sky, only a sad, monolithic gray. The rain was pouring for hours on end, a delicate veil of water sprinkling down on the shadowed city. It was not a true rain, nor a storm, nor an autumn shower. This drizzle was everywhere, tiny droplets creeping into every nook and cranny, trickling under clothes. It was as if the air itself was soaked and cold, unpleasant and ubiquitous.

Only a few unfortunate souls were unable to find an excuse to remain in their cosy homes or offices in this weather. They were walking on the otherwise empty streets, hunched up, never stopping or looking around, not even bothering with umbrellas. Lonely squelching steps in the monotonous drip-drop-drip of droplets. The sporadic car seemed half-drowned by the sound of rainfall.

The rainwater was running down the pavements, washing dust and dirt away in a filthy stream and bubbling towards the sewer drains. A concrete wall adorned with a psychedelic graffiti was crying tears of blood now that the paint started to dissolve.

Suddenly, the whispering drizzle was torn apart by a screech, distant and mechanical, rumbling and approaching. It was a four-stroke engine, crying like a wounded animal forced to run for its life. It dashed through the streets, closer and closer, until it appeared - a motorbike in a skid and a splash of water. Somehow, the biker kept control of his machine and for a second, the few pedestrians looked in shock at the old and tortured motorcycle. The leather and metal was drenched in rain, and so was the biker in his black and spiked garb. Whoever was behind the smoked glass of the motorcycle helmet, he paid no attention to the rushing water that made the road barely passable, and hit the gas. His bike roared and its spinning wheels sprayed water high in the air, and then the biker was gone. 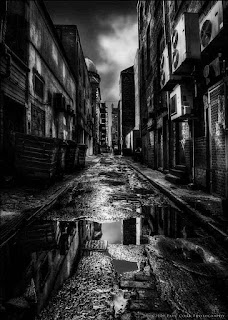 The motorcycle slowed down to a halt in a narrow alleyway, sputtering as its engine stopped and the biker got off. He went back a step or two and looked over the main street, even if "main" was hardly the right word to describe it. The old asphalt was cracked and crumbling, pavements were nonexistent and the high buildings around were concrete and defaced with scribbles. Only the occasional steel balcony and the garbage containers full of house trash betrayed the buildings' purpose as apartments.

It was impossible to tell where the biker is looking with his smoked glass visor, yet he seemed to study the identical houses carefully. Rusty doors and barred windows. Tasteless graffiti. Closed curtains. A forest of chimneys releasing a dark, melancholic smoke. And still the ever-present rain.

There was a hobo sitting across the street next to a dirty rubbish bin. He was staring at the biker, mumbling and shivering. A door nearby creaked and some old granny stepped on the street. The biker moved and caught the door before it could close.

The hall was dark, dank and damp. The last working light was connected to some raw cables and constantly blinking. The plastering was stained and mouldy. Someone was throwing up behind one of the apartment doors. A music too loud to ignore intertwined with a reek of filth.

The biker went to the staircase and started to climb up, one decrepit floor after another, until he stopped on the seventh floor. The lights here were actually working, and even the floor seemed somewhat cleaner. All of the doors were closed and locked. The biker slowly strode down the hallway, until at the very end, he turned abruptly towards a door with a small crucifix hung above the spyhole.

He approached the door and fished some tiny tools out of his pocket. In a second, the lock clicked and the door opened. The biker creeped into the apartment and closed the door as silently as possible. Someone was talking in the room to the left. He went a bit further in and peeked inside.

The room was meant for a very special kind of business. The floor was covered in thick and deep carpeting, embroidered with strange symbols and runes. Glass cases along the walls were filled with crystals and candles and animal skeletons and human skulls and cards and dried herbs and tiny bottles and many, many more occult items. There was a small cauldron in one corner and a cage with a parrot in another.

The far wall of the room was dominated by a large pentagram and an old sofa was standing right below it. A woman that could no longer be called young was lying there, seemingly half asleep. A long-haired man was kneeling beside her, his right hand resting on her forehead. He was handsome, calm and focused. Dressed in a white tunic and loose pantaloons, he looked a bit like some eastern guru. The woman was breathing slowly and deeply, her body taking in the calmness of the man and relaxing. For a precious few moments, all of her burdens were taken away.

There was nothing but peace and quiet. 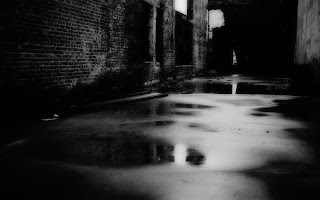 The biker stepped inside and the parrot shrieked. The woman woke up, confused and agitated. The man in white straightened and stood up, his face suddenly sombre.

"Here we go again," said the biker. His voice was dull and hollow from below the helmet.

The man helped the woman rise and gestured for her to leave. "I'm sorry, Mary, but we'll have to end early today. I'll call you to arrange the next appointment. I'm sorry. Have a nice day." The door closed behind the woman.

"You know her time is up," said the biker. He didn't move since he had entered the occult room.

"Still, I can help her. She can pass away in peace." The man in white sat down on the sofa. He was confident, a little angry, a little sad. "I never stopped helping. I never wanted to stop. Yet I had to hide, from you and the others."

The biker's helmet moved a bit as he examined the glass cases and trinkets. "Do you think these can help you?"

"Some have already saved my life. Nothing changed since the last time. Nothing will change if you try again. Return to your master and leave me be."

"I can't. You know that." The biker walked onto the carpet and the embroidery started to dimly glow. "You were like a son to my master. But you failed. You will come with me."

"He failed me!" The man in white stood up, a much stronger hint of anger in his voice. "I believed in him, I trusted him! And he would have let me die for his Plan!"

"Then you should have died for him." The biker turned to face the man. "Two millennia down here. How can you still bear it?"

"Will you?" The biker pointed at something lying in one of the glass cases. It looked like a large splinter of wood. "Memories?"

"I want to remember that I was betrayed. My exile is worth it if I can get my revenge."

"You talk of betrayal and revenge, yet it was you who faulted. 'Always loyal,' do you remember that? We both took the oaths. We were friends, once."

"I don't want to play mind games with you, Azrael. I take no pleasure in fighting my brothers, but you are all blind."

"I don't play any games." The biker's voice suddenly dropped through several octaves, until it sounded like a coming storm and wind in forgotten ruins. His black leather clothes were more like an armour now, with a cape and a hood were the helmet was. He clenched his fist and shadows danced about him, then he was holding a haft of dark wood with a sickly gleaming blade of a scythe curved above his head. "Come with me, please. Pray for forgiveness."

The man in white relaxed, closed his eyes and smiled a smile full of sorrow. His face was painfully beautiful and illuminated by inner light. The air itself was glistening around him, but his sleeves and trouser legs turned crimson as blood started dripping from re-opened stigmata. The pentagram lit up and the whole room seemed to respond. "He had forsaken me and I shall be his undoing."

The man in white opened his eyes and they were full of starlight.