Most demons worth their Evil have teleport without error, and actually most Outsiders and powerful magical beings in general will have some form of teleportation, as instant relocation is just that good. This presents an option for new flavour - surely not every spirit uses the same teleportation spell?

The shape shifting trickster disappeared, but did she burst into flames, discorporate into smoke, or just blink away? A knowledgeable character might be able to tell the type of a spirit by their form of teleportation. In addition, a creature who blinks away will probably easily escape a mundane pair of shackles, but one that opens portals will have much harder time breaking free. Teleportation becomes much more fun if it has some drawbacks or requirements.

...how does this spirit teleport?

Reading through the rulebook of Encounter Critical, I happened upon several rules that I wouldn't mind in the least to see adapted in other games. 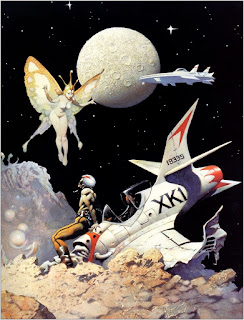 Low Attributes, High Skills
Rolling low for attributes is infuriating. Sure, such character is still playable, but it's hard to shake the feeling they are bad because of the low scores.


Class Quests
Every class in Encounter Critical has its own inbuilt mini-quest that must be finished before you can increase in level. Quoth the rules:

There is even a place on the character sheet to write the deeds down, so the player can later review what helped them achieve their levels. Not only does this add a layer of flavour and personality, it also doubles as easy back story if you make your players come up with the deeds that raised them from 0th level NPCs to level 1 adventurers.

Every warrior eventually attracts a great companion. This will be a monster mount such as griffin or space monster (25%), an equestrian mount of great endurance and intelligence (50%) or a shield mate, a warrior or like mind and half the warrior's own level, who is absolutely loyal (25%). This occurs when the warrior gains a level, but the exact time is uncertain. There is 15% odds each new level; those odds do not accumulate. Roll every time the warrior goes up in one level. The warrior's great companion is once in a lifetime.


For any swords & sorcery game, this rule is pure gold.