The Sun was beating down hard on her bare shoulders as Eli took a short breather to think through her next few steps. There was a small overhang on the rock face just above her, and then she should already be on the ledge. She let go of her comfortable cranny and gripped a sloper over her head instead, then shifted her weight and hauled herself upwards, until she was hanging on her straightened arms. The stone was coarse and dry under her fingers, and she was sweating and breathing deeply and enjoying every moment of this.

Eli hooked her heel on the edge of the overhang and then traversed to where it broadened into a wider, grassy cleft with a narrow cave opening. Sitting down on the ledge, she dangled her feet above the rustling tree crowns and relaxed in the warm sunlight until the drying sweat started to feel chilly on her skin. Then she got up, took out her flashlight and approached the cave - the entire point of coming up here. She found about this small cave on a geocaching website, a cache prepared specially for climbers. She will have to snap a picture once she finds it, to brag into the twins' faces.

She had to duck low to enter the cave, but the ceiling rose quickly and she could soon walk almost upright, even if the floor covered in gravel and the angled walls made it somewhat difficult. The corridor took a sharp turn and then abruptly ended as a mound of dirt and stones completely blocked off the path forward.

Eli looked around for some hiding place that could hold the plastic container of a cache, but the only obvious spot seemed to be the top of the wobbly-looking pile. On the other hand, she wouldn't be the first person to climb here, so it couldn't be that unstable, she reasoned. Stepping carefully, she got to the top of the heap only to find a tight crack that someone might just about stick their arm through. In the shadows cast by the hard edges of the rock, she could make out some kind of a box sitting askew in the crevice.

She had to crouch on the mound to reach it, and had to try twice to drag it closer. It wasn't a plastic box but rather an glass jar stoppered with a metallic cap, surprisingly heavy but filled only with some dirt. If this was someone's idea of a trolling cache, they were quite dedicated to the joke to bring it all the way up here. Eli held the jar up to her flashlight and tried to shake it, when the grey powder rippled and lunged against her at the glass.

Completely surprising herself, Eli let out a high-pitched scream and slipped down from the mound, both flashlight and the jar flying from her hands. She heard the glass shattering, and the cave was cast to shadows as the flashlight fell somewhere between rocks. Scraped and annoyed, she went to get it back, but somehow the flashlight managed to wedge itself just deep enough to escape her grasp. She did find the lid of the jar, though, curiously heavy and thick, with some fine engravings on the underside.

As she was turning the lid in her hands, a sudden sound froze her mid-thought.

Eli stumbled to turn around in a blink, barely catching herself on the cave walls. In the sparse light of the lost flashlight, she could just about roughly make out a tall, muscular figure that was now filling the corridor, completely blocking off any hope of an escape route. With adrenaline thrumming in her head and the shadows playing tricks on her eyes, the figure seemed larger than possible, imposing and inhuman. Its grey skin rippled.

Before her brain could decide on any fight-or-flight response, the figure lifted its arm and Eli wasn't quick enough to dodge.

The figure touched her forehead.

It was as if a single needle of numbness speared into her brain. A split second of weird sensations that forced Eli to close her eyes and take a step back. She steadied herself on the cave walls, unsure what else to expect.

She cracked her eyes open again, glancing at the figure that was still standing in place, silent now.

Eli licked her parched lips before speaking up: "What did you do?" Even as frightened as she was, she felt a momentary pride that her voice didn't falter.

The figure gestured and globe of light appeared above its extended palm, providing a soft illumination that only accentuated the confined conditions of this little cave. Eli could now finally take a good look at the massive man. He was naked, except he wasn't... equipped. His hairless grey skin gave off nearly metallic red gleams in the light and he held himself way too still, not even breathing, no expression on his face.

"Accept my apologies for scaring you and for melding you without your consent. I didn't speak your language and needed to make sure we could understand each other. I have too many questions now that I was released from my prison, only thanks to you of course. For that, I am deeply in your debt."

"Now tell me, what is the name of my liberator?"

"My lord djinni," a loud voice sounded behind the grey man. He turned to reveal an old man in a longcoat, doffing his hat in a deep bow. "I am very sorry for interrupting your conversation, but I couldn't have not noticed you awakening from your secret slumber, and I would be loathe to fail in paying you the respects you rightfully deserve, my lord."

"Rise, wizard," the djinni said, "you are forgiven. It pleases me that my kind is still well remembered, even though I understand I slept for a long time indeed. Before my treacherous imprisonment, the skies were silent except for the songs of my brethren, yet now I can hear the whispers of machines everywhere. Is that the mankind's making? Have they rebuilt the chrome kingdoms of yore?"

"The mankind went a long way since you might last recall, my lord, yet to this day the greatest of their accomplishments pale in comparison to the glory of the least of the djinn. This planet is still the hinterland it always used to be. Which reminds me, if I may be so bold to offer my services, that I know of a Way to your homeland. Your kingdom must surely be amiss due to your absence."

"You seem very eager to see me gone, wizard."

"My only hope is to serve well enough for you to spare me a thought on your glorious return."

Eli realized she's holding the strange lid in a white-knuckled grip as the djinni scrutinized the wizard for a long second.

"I will accept your services. Now tell me, where is this Gateway?"

The old man fished out something that Eli couldn't see from his pocket and shown it to the djinni.

"Very well," the djinni said and raised his hand above his head before turning it slightly. The whole world turned along with his hand.

Eli very nearly fell as her equilibrium was thrown out of whack. She hugged herself and bend forward as her stomach felt like making a somersault, barely holding back nausea. She tried to breathe, but the air was too hot and dry. It was suddenly so bright all around that she couldn't quite see.

There was sand beneath her feet.

"I remember these fields lush and blooming," the djinni seemed to whisper.

When Eli managed to take a shallow breath and blink away the tears that welled in her eyes, she saw the three of them standing in front of a massive block of hewn sandstone. The Sun was bright on the cloudless sky and all around was nothing but endless sand and jutting sandstone rocks.

"What happened?" she could barely rasp.

The djinni abruptly turned to her, even as she unwittingly stepped back again.

"I apologize for the second time. I did not think of you when I allowed the wizard to assist me. I have to cut our time short, but you surely understand how much I yearn for my home and vengeance, rash as my decisions might be because of it. I assure you that your services are remembered, too, and shall be rewarded." He seemed to consider for a moment before continuing: "Unless you wish to come with me? The xanthous halls of al-Mariikh have not been seen by a human eye ever before, but I would be willing to grant this boon to you."

"I..." She had no idea what to say. Off to the side, the wizard was staring at her intently. He looked a bit alarmed, maybe? "...don't think I want..." The wizard looked alarmed in a different way now. "...to abuse your kindness so much, my lord?" Eli finally stammered. The wizard seemed to relax slightly.

"Indeed. I cannot afford a scandal when my enemies had ages to plot against me. Still, you both have my gratitude."

"Thank you," Eli said and after a brief second of silence added, "my lord."

"We shall await your return, my lord," the wizard came to her rescue.

The djinni turned back to the sandstone block and ran his hand along the carved symbols, over long centuries eroded into indistinct grooves. Then he touched some of them, one to the left of him, three above and two on the right.

Eli noticed how the wizard, dressed way too warmly for this desert or what it was, has several beads of sweat slowly travelling down his forehead. He didn't try to wipe them away.

With a loud crack, the sandstone in between the touched symbols shattered and fell inwards. Within the resulting hole, Eli could make out a metallic door frame filled with darkness that didn't seem to be touched by the pervasive, bright sunlight in the slightest. A light wind picked up towards this door.

"You shall, and once I return, you both shall have a place among my thralls."

Then the djinni stepped through the portal. The wind stopped as the darkness of the portal winked out, replaced by a smooth plate of the same metal as the door frame.

Suddenly, the wizard dropped down on the hot sand as if absolutely exhausted, wiped his brow and breathed a heavy sigh of relief. "Thank goodness that's over. Though it actually went better than I expected."

It took Eli a few more seconds to compose herself enough to speak without having to worry about freaking out: "What the actual fuck was all of that?"

The wizard gave her a wry look before responding: "That was a djinn king you let out of his eternal prison, and I sent him to Sagittarius A*. No need to thank me, let's all hope he didn't survive. My name's Mr. Kipfel, by the way."
next
Posted by red_kangaroo at 09:23 2 comments: 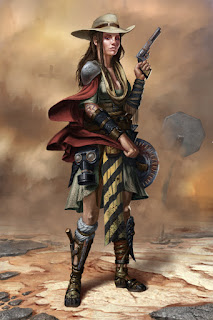 If you rolled a ranged weapon, you also start with a (roll d4, all deal 1d4 dmg):

If your ranged weapon has a number of shots listed, you need to take a turn to reload it once you use the shots up. 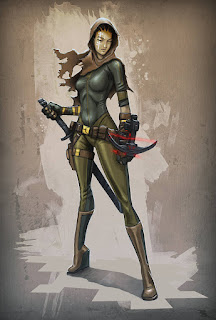 Choose one of the benefits below:

And also start with enough water and rations for two days. 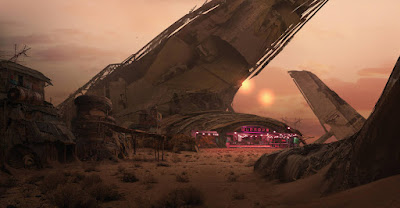