Psionic powers are normally gained as a mutation. Nearly all powers allow a Save to resist the effects. Powers that are not instantaneous last until your concentration breaks. Each psionic power takes up a Memory slot.

Mental psionics target living, thinking creatures - droids are immune and invisible to mental psionics, while replicants (synthetic humans) and cyborgs are highly resistant (and thus have advantage on their Save).

Every time you use a psionic power, roll an Intelligence check to retain the power. On a failed roll, the power manifests normally but you cannot use it again until you take a daily rest. 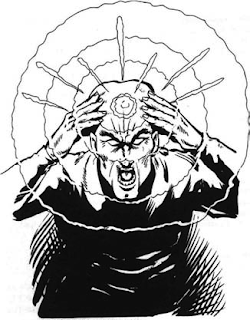 Psicrystal
Slowly formed in brains of powerful psions and extracted after their death, it contains the psychic imprint of a psionic power. Anyone can use it to manifest its power, but once the roll to retain the power is failed, it blackens and falls apart.

Psionic crown
Artifact of a bygone era, made of ridiculously complex tech and powered by raw quintessence. When you fail a check to retain a psionic power, you may choose to loose a different power instead.

You need at least two psionic powers to make any use of it.

Psychic stimulant
Psi-drugs, brain fuel, miracle sugar. Delivered as (d4): 1) an eyedrop, 2) a transparent pill, 3) a serum injector, 4) a sniffed powder. All of your powers are refreshed and for 1d6 minutes, you can use them without rolling to retain their use. Highly addictive.

Sensory deprivation tank
A soundproof coffin, its inner walls painted vantablack, filled with gel that numbs your body as you float in nothingness. The range and precision of your powers is vastly increased while locked inside.

Some powers are simple to enhance - telepathy lets you probe deeper into the mind, operate with greatly extended range, or access mass mind, the world-wide telepathic network. But even powers that would normally seem useless while locked in a tank should have some use, so don't be shy about inventing something that could be an extension of the base power.

Kinetic shield could be enhanced into a large inertia dampening field. Sixth sense might allow you to guess the location of all nearby points of interest. Biokinesis might let you regenerate lost limbs or reverse ageing through sheer power of will.
Posted by red_kangaroo at 21:16