Unless you want to be rather hard in your cosmic sci-fi game, you will need a spaceship that can zip between star systems. Instead of giving everyone some generic FTL drive, what if each spaceship manufacturer had slightly different engines in their ships? Suddenly new opportunities for shenanigans arise when ships with different advantages and drawbacks compete.

What kind of faster-than-light drive will your spaceship use?


Roll for a base type and then for two drawbacks.

d4 Base Types of FTL Drives

How F Is Your FTL?
I've decided to use a rough speed of 1000c (2d100 x 10c) for most FTL travel. This is fast enough that interstellar trips are relatively quick, yet it does not completely undersell the vastness of outer space. A ten light year distance will take around three days of flight, which for me sits comfortably between "space is irrelevant and no obstacle at all" and "not telling the players no, just making it slow enough they will get bored thinking about leaving the star system".
Posted by red_kangaroo at 15:26 1 comment:

This is an expanded bestiary for Abyss of Damned Souls, though you could use the bogeymen in any game.

They used to be human, but they lost so much they could either die or adapt. As their souls and humanity slipped away, they fought and survived and changed. They may be monstrous, but are not necessarily monsters. Their powers might make them more than human - but they are human no more.

Every single one of them is missing something and can never get it back.

So what is a bogeyman?

Take any player character, really. What awaits them in the dungeons? Some may bring back a fortune, but most will loose limbs and minds, mutate and adapt and change to survive. What returns is not a human, but something more monstrous and violent and powerful.

Email ThisBlogThis!Share to TwitterShare to FacebookShare to Pinterest
Labels: bestiary

I submitted an entry to the 200 Word RPG Challenge. It's basically a card-based deck-building RPG.


It is intended for 1 game master (the Abyss) and 1+ players, and you will need several decks of playing cards.

You got lost and went where all lost things and forgotten places go.

You'll need one suit from a card deck. Take 2-10 and choose one face card.
This small deck is your soul.

Actions have difficulty determined by the Abyss*. Draw a higher card to succeed. When you draw your face card, you automatically succeed and reshuffle your deck. You may discard extra cards to sum them with an already drawn card, but only if the action corresponds to your face card. Discarded cards are gone forever.

In conflict, opponents draw from their decks and the higher card wins. Winner takes the card of the looser, both discard their card in a draw. When only your face card remains, you fade away.

The Abyss will throw obstacles and monsters** in your way, and reward achievements with inhuman powers.

You'll loose pieces of your soul, then patch the holes with stolen bits of others. Your deck will change, until nothing from you remains.

You'll be a monster.

Damn you,
damn us all.

*) Game-master.
**) Monsters may be customised by the size and value of their deck.


Unlike normally, when I pile fun mechanics together and see what sticks, this game has themes I tried to build the central action resolution mechanics around: power at a price and the slow loss of humanity.

The players will start with a full suit of cards in their deck, and then loose them as they perform big actions or get defeated in combat. They will gain new, different cards from successful combat with monsters, and magical powers when the Abyss is pleased.

I suggest that the Abyss uses distinct decks to build their monsters, so that it becomes obvious how much the players' decks changed. Hopefully, they will notice that there are no true "monsters" in the Abyss, only other lost souls that survived for far too long.

How to make a monster
Separate a deck of cards into number cards and face cards, then shuffle them both. Roll 2d6 and take that many number cards, then add one face card. Have a look at the face card and decide what the monster might be like, what does it want and what kind of magical power it has.

Very weak monsters might have no face card, turning to flee once they run out of cards. Their deck is reshuffled only once they rest. On the other end of the spectrum, very powerful creatures might have more than one face card. 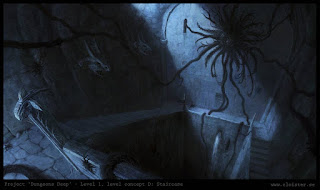 Example bestiary
Edit: Here are some more bogeymen for Abyss of Damned Souls.

Rats and bats and piranhas and insects
Deck: 3-4-4-5-6-6
There are some diseased, warped animals in the Abyss. They have no face card, so once they run out of cards, they will turn to flee.

Goblin
Deck: 2-2-3-4-5-J
What do you get when you take a human and remove everything positive from them? An undersized, disgusting wretch. It cannot win in a fair fight, so it won't fight fair.

Carver
Deck: 5-6-6-7-7-9-Q
A woman stitched together from ill-fitting body parts and stuffed into a dress suit. She can knit your wounded body, but only takes payment in fresh organs and body parts.

Summoner
Deck: 10-10-A
A man with screaming faces tattooed on his skin. He will offer secrets and knowledge, if you promise him a favour. He may summon anyone who owes him with just a word.

Wraith
Deck: 3-4-5-8-K
Skeletal figure in tattered robes. It's falling apart and not long for this world, but the wounds inflicted by its rusty knife never heal.

There was nothing but darkness full of hungry, horrible things.

As they drew ever closer, I screamed in terror: "Let there be light!" And there was light.

And I saw that the light was good and separated me from the darkness.

Yet it was so very fragile and fleeting. 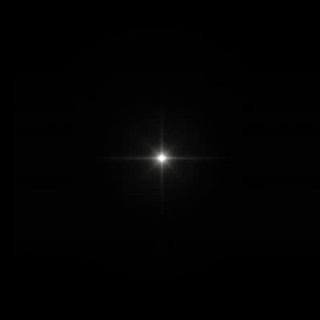 Posted by red_kangaroo at 07:57 No comments: