There is a small shop in Caipi-Taal, in a backalley where the Black Street (known for its blacksmith workshops) meets the Moonward Street (which runs from the northern gate to the Cathedral of Authority). It is known as the Polearm Emporium and carries the widest selection of a certain type of weapons. Can you guess what type of weapons this shop offers? 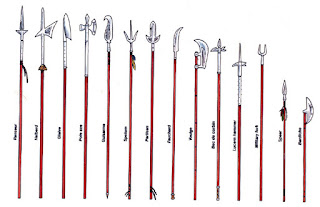 Quite obviously inspired by this Order of the Stick strip. But this emporium actually has weapons to sell. And while all the weapons will probably have pretty much the same stats, the players can buy a polearm with a cool sounding name here.
Posted by red_kangaroo at 21:45 2 comments:

THIS GAME WILL KEEP YOU AWAKE WHOLE NIGHT

You will be unable to put the controller away! Just one more combat, just one more quest! You will become hooked on the innovative story lines! You will level up and progress!!!
Try Progress Quest!
Play as a traditional half-orc or dwarf, or try something unique, like a land squid, a talking pony or a trans-kobold! Shatter limbs as a robot monk, or shatter minds as a mage-illusioner, or shatter expectations as a lowling!! Find out about kobold penises!!!

Try Progress Quest!
Download here or play for FREE in your browser!!!

Surprisingly enough, this is not a spambot. :) Instead, it's a fun little "game" I found. I won't tell you more, because that would spoil the surprise.
Posted by red_kangaroo at 18:21 No comments:

Email ThisBlogThis!Share to TwitterShare to FacebookShare to Pinterest
Labels: joke

Gateways to the Spirit Realm

There are two worlds overlaying each other, just an eye blink apart. Reality and the spirit world. Your mind wanders the spirit realm when you sleep and dream, but you can also cross the border between worlds corporeally, if you find the right place. Such a place is called a Gateway, and every Gateway has its Key - a password, a ritual, a price to pay.

Gateways are rather few and far between, but not rare enough to pose a problem for determined party. Note however that many movable Gateways will be in private collections of wizards or eccentric nobles, while some immovable Gateways might be guarded. There should be no widely known Gateways, as that robs them of their mystery.

Overusing a Gateway might be noticed on both sides: Maybe a king will want to prevent a Wild Hunt incursion, or will demand the Gateway for himself to scour the spirit world for valuables. Maybe some Folk will come to destroy the Gateway and prevent the influx of nuisances from the real world, of they will bring an army to start a Wild Hunt. It's just better to remain unseen.


d20 Gateways and their Keys
Finally, you can always go deep underground, deeper than any normal cave. Once you have reached the Veins of the Earth, the veil between Reality and the spirit world will be frayed enough that ghosts will walk among men. 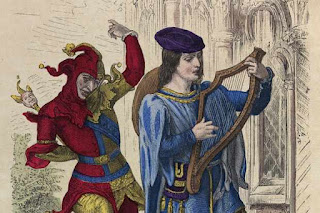 Posted by red_kangaroo at 15:02 No comments:

There are way too many magical swords, so this time we'll have a look on magical clubs. I mean, a cudgel is one of the most simple and numerous weapons around, so there must be some that are magic!

A large tree branch (treat as a heavy weapon) with an old, horned skull nailed to its top. It once belonged to a wild man who plagued the Vindale Forest with his brutal crimes. He was eventually hunted down and killed, but his weapon was lost.

Every time you kill a natural animal, you may trap its soul in the bludgeon. The bludgeon can store up to three souls and starts with one random animal soul. You may release the trapped souls freely. You may use a soul to cast beast's sense or beast's grace (see below). This expends the soul and casts the spell with MD equal to the target animal's HD. These "fake MD" do not return to you, but they may generate a Mishap if you roll a double. Triples (or more) count simply as doubles.

Gain [dice] movement powers of the target animal. The GM will rule whether this will be a special ability, or a simple bonus to certain rolls.

For example, you might gain hare's jump, cat's climbing or stealth, snake's quick reflexes, or otter's swimming. You may not gain a movement power you don't have the required body plan for, ie. you can't get flight of a bird unless you already have wings.

Cudgel in a Sack

Once upon a time, there lived three brothers who each acquired an item of wondrous power. The first one had a table imbued with create food and water and established a successful tavern, living a peaceful life. The second one had a donkey who could conjure gold and became a moneylender, until he was arrested, tried and executed for counterfeiting. The third one had a sack and a cudgel in it. The rumours about his ultimate fate vary, but you now hold his magical cudgel in a sack in your hands.

When you open the sack, the cudgel flies out and behaves similarly to a dancing weapon. It doesn't act on its own, though. Instead, you can use an action to move it or attack with it as you please. It has a fly speed equal to your Movement, but cannot move farther than 50' from you. It attacks as if you were wielding it.

Limb of the Black Tree

This club is splintered and burnt, taken from a tree set aflame by lightning.

You can store a single fire- or electricity-based attack in the club, completely negating it. You may then release it later at any target you wish.

For example, you could catch a fireball from an evil wizard in your club, and later throw it at a group of goblins. Or stick you club into a campfire to instantly extinguish it, and later set someone you hit aflame.

A short, gnarled club (treat as a light weapon) covered in crude, vulgar symbols and drawings.

A fair warning: Don't use this weapon unless you know your gaming group. I have a dark sense of humour, but many people do not share it.

Once per day when you hit with the love stick, you can have the victim be affected by charm person. Instead of viewing you as their best friend, though, they will see you as the love of their life.

They would do nearly anything for you, and while they may (feebly) oppose you, they are unable to place any blame on you. No matter how despicable your actions are, or much you harm them physically or emotionally, they will rationalise it as being their own fault, or for their own good, or at worst a forgivable mistake you couldn't avoid. Thus, not even attacking them breaks the spell.

The effect lasts for a day, but if you use the love stick on them again before the effect expires, they receive no Save to resist the prolongation. However, once the spell ends, they will remember everything and behave accordingly.

There was an infamous serial killer in Tam Ruat, who lured foreigners to her house, poisoned them and then buried them in her plum orchard. It took many years to discover her crimes and by then eighty seven skeletons were unearthed among the trees. She was drawn and quartered. Only the gods know who decided to make a greatclub out of one of the plum trees from that accursed orchard.

Anyone struck by this gnarled greatclub (treat as a heavy weapon) must Save or be stunned for 1d4 rounds as they vomit plum stones. No one can be affected by this power more than once per day, no matter if their Save was successful or not.

Additionally, once per day when you kill someone with the club, they are transformed into a midget plum tree and immediately grow [their HD] rations worth of plums.

This quarterstaff has several dozen blue beads on short strings tied to its top. As you walk with it, the beads constantly rattle against the wood, reminiscent of the sound of raindrops. The story goes that it once belonged to a minor god of rain and a sliver of her power remained in the staff after she died in the War in Heavens.

Every morning, as long as the weather is not some form of a rain or storm (or snow in the winter), reroll the weather for the hex (or location) the walking stick is in (keeping the result even if it is still not a rain).

The walking stick stores 1 MD which the wielder can use to cast control wind. The MD is spent as normal on 4-6, and you can cast the spell over and over again as long as the MD remains unspent. The MD refreshes every morning.

This short club bears the sigil of the royal family of K'lach. Long ago, it belonged to the emperor W'park the Wonderful, known for his penchant for expeditions, and his eccentricity. How the baton ended where you found it is anyone's guess, but W'park most likely just lost it during his travels.

The baton is normally the size of a short club, but its wielder can change its size at will, from a toothpick to a ten foot pole. The baton is also virtually indestructible and when extending, has enough strength to crack stone or bend iron.

A severed arm of a zombie, fashioned into a macabre club. It bears a tattoo saying: "Omnia mutantur nihil interit." It also smells pretty bad.

Once per day when you hit with the zombie hand, you can release your hold to have it animate and start choking the victim (1d6 damage per round). The zombie hand de-animates once the victim is dead, it is ripped off the victim's throat, or you grab it again.

BTW, here is my list of links to various magic equipment.

Do you have more links? Gimme, gimme!
Posted by red_kangaroo at 20:06 No comments: