Class: Paladin of the Wild

[S]ymbolic thought is the one true evil. What you are doing now, reading and comprehending what you are reading, is the penultimate sin. That is why druids write "you are damned" throughout the forest. Because if you can read it, it is true.

There is a planet and we all live on it. The planet is an egg, and within the planetary core, an unborn starspawn slowly grows. It will not hatch just yet, but as long as it feeds, that time will come. It feeds on thoughts and knowledge.

Animal thoughts are pure, too simple to offer enough nutrition. The beast below may devour as many animal thoughts as it wishes, but there will never be enough and ever so slowly, it will starve. But the thoughts of men are ripe with symbols and assumptions and knowledge and worries. With every new philosophy or discovery, they are more delicious. With every new city or frontier settlement, they are more plentiful. The beast below can gorge itself on the thoughts of men, and fatten and grow.

Thus abstract thought is the ultimate sin. It is a disease plaguing the minds of men, threatening the very planet and all life. Language is just a vector of the disease, but a powerful one. Civilization is a cancerous growth on the face of the world.

Nature knows all this. It does not care about humanity, it cares about the end of the world. If a single species is to die to save all life, so be it, that is a small price to pay. Nature knows all this and sometimes, it decides to act. Paladins of the wild are the antibodies Nature creates to destroy the plague of thoughts.

The paladins of the wild roam the lands not according to a divine will, but following instincts long forgotten by humans. They work with druids. They burn cities and libraries. They kill many and destroy lives of many thousands. They devour their enemies and deface anything of value they seize. They will howl in victory once the last kingdom crumbles and civilization as a whole will be on its knees.

Then what is Bad, in the eyes of a druid? Why, all the things that destroy the natural order. Rationality, math (druids hate math), language, money, metallurgy, fur trappers, philosophy. The philosophy of a druid is "no philosophy". (...)

Nature is red in tooth and claw. Nature is hungry and rapacious. Nature is self-absorbed. Does a panther care about anything beyond it's own well-being? And because these things are Nature, they are also Druids.

You gain +2 to Save vs poison and disease for each Paladin template you possess.

Starting Item: A small animal you killed this morning.


Bestial
You shun language and civilized knowledge. You prefer not to speak and instead communicate with grunts or gestures. You are ignorant of social conventions and expectations. You cannot read, write, or understand math.

You dislike wearing clothes and unless necessary, will avoid them. You are accustomed to wilderness survival and have no problems going around naked. You are highly resistant to exposure and a capable hunter, forager and tracker. You can walk with bare feet as if you were wearing thick boots.

You have no use for money, because money keeps civilization alive and helps it grow. You only gain experience for gold you can bury, hide or otherwise dispose of where it won't be found again.

You get -2 to Reaction roll for civilized creatures if you are the one to talk to them, or +2 for animals and savages.

If you sleep in a building, Save or receive no benefits from the sleep.

You cannot lose your powers and faith - it would be like a mechanic losing faith in gasoline, like a tsunami abruptly stopping mid-destruction because it no longer believes in its strength. But should you stray and start to live a civilized life, remember that nature knows everything and never forgives. Nature knows no penance or mercy. Nature is horrible.

Druidic Speech
You can speak with animals, but not in the way humans understand speech. You communicate using body language, grunts, growls and intuition. There is no abstraction, no symbolic thought in your communication. It is pure, untainted by the sin of civilization.

You can use druidic speech in any form you take.

Druids shun human language and jealously guard their secrets of speaking with animals. Should you try to teach druidic speech to anyone, you will be hunted down.

Shape of the Beast
You can change shape as per wildshape spell (see below), but your spell is unlike wizardly spells. You do not prepare spells, you cannot read scrolls or spellbooks, and you cannot write down any of the "spells" you know. Otherwise, you use Magic Dice (MD) as a wizard. You do not generate Mishaps or Dooms.

Form Mastery
When you wildshape, you can shapeshift only a part of your body, gaining whatever effect would be appropriate.

For example, you could transform your legs into ones of a kangaroo, or the eyes of an owl, the fangs of a viper, a turtle shell, the gills of a fish, etc. You can also use this power to combine various animal forms, or to transform into a half-human beastman.

You polymorph into an animal you have personally killed and eaten from. You can only transform into animals of HD up to twice yours. You gain all abilities and limitations of your new form, except that you retain your mind.

At 1 [die], you can only assume forms of natural animals. At 2 [dice], you can also transform into giant, dire or mutant animals, or swarms. At 3 [dice], you can shapeshift into magical beasts. At 4 [dice], you can polymorph into undead, spirits and aberrations. They still have to be non-humanoid and edible to you. 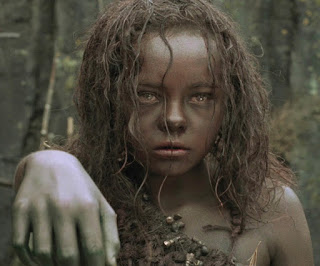 Background:
Posted by red_kangaroo at 18:13