Class: Wizard of the Red Hand

There is a reason why wizard towers and colleges often end up destroyed or outlawed. The First Estate sees heresy in their wanton manipulation of reality. The Second Estate fears their power, for what good is a knight when you can shoot a magic missile through his head from over the next hill. The Third Estate remembers all too well the incidents of the past and distrusts magic, and wizards even more.

Yet there is a school of magic in Jarjuna that had avoided angry mobs and inquisition for centuries. It is even well-liked, and seen as humble, pious, helpful and kind. Wizards of the White Hand enforce a strong secularity from powers both worldly and religious, keeping to themselves except for the occasional healing of the ill, or war efforts. Do not meddle in the affairs of the mighty and win the favour of masses, that is their creed. And it's working well, for people don't cross the street when they see a White Hand wizard. They greet them and maybe even invite them for a tea.

However, there was a time when the White Hand nearly lost their hard-won status of non-interference. There was a civil war in Jarjuna about fifty years ago. The old king died with no heirs and his relatives threatened to tear the country apart in their lust for the throne. Wizards of the White Hand watched the towns burn and people flock to their gates, because they were the sole party not dragged into the conflict. They helped as they could, but voices started to be raised among them that they should do more. They are hiding in their towers when their country needs them more than ever before. They helped their country and marched to war. They helped their country and battled the plague. And they will do nothing to help their country when it rends itself apart?


And as the civil war continued, a second war was fought in secret, the most inconspicuous wizardly war ever. No one outside of the School of the White Hand knows where the new wizards with red circles on their foreheads and hands full of terrible power emerged. The White Hand helped to contain them and people of Jarjuna were inclined to believe the so called "Red Hands" to be opportunists from elsewhere, who sensed a weakened country and wanted to take over. The White Hand has great propaganda.

The truth is, wizards of the Red Hand started as a starry-eyed group among the White Hand, and wanted to make everything right. They were ready to mend their country, no matter what it takes. Their peers didn't understand their vision, they banished them and renounced them in public. They could no longer claim to be wizards of the White Hand, because who would believe them? They had to fight not only for their vision, but also for their survival. And ever so slowly, they changed.

The civil war is long over and the White Hand sits in its place of glory. They did nothing and were rewarded. The Red Hand is seething in hiding, as they gave up everything and lost both their fight and the reason they were fighting. They wanted to help but couldn't, wanted to make a difference but didn't. They were used as a public enemy and the country they were ready to defend wants nothing more than to burn them at the stake.

He who fights monsters, right?

You are an Outlaw, both Around Here and in Foreign Parts.

You can establish a link with a creature by feeding it a droplet of your blood. You can cast any of your cantrips or spells through the linked creature while it is up to [wizard templates] miles away. You can only have one link at a time.

You cannot eat meat. You must wear a red circle, either on your robes or belt, or otherwise marked visibly on your body.

While using inflict light wounds along with your Perk is obvious, the linked creature can also be used with spells like other eyes, vomit swarm, puppetry, or chains of earth to great effect.

The target takes [sum] damage, no Save.

Your arms grow in length by 5' per [die] while loosing nothing from their dexterity.

You vomit up a massive torrent of tiny insects, creating an insect swarm in any adjacent space. Treat it as a swarm with [dice] HD and Movement equal to yours. The swarm will hunt for your enemies.

You take control of [dice] limbs of the target. They can still use them normally, but you can take an action with their limbs, overriding their wishes.

For example, you could drop their weapon or attack, trip their legs, shout, or hold their eyes shut.

You create 1d4 + [dice] illusory images of yourself, which move as you move and always stay within 5' of you. They are constantly stepping through each other, so that it is impossible to tell which is which. When an enemy attacks you, roll to see if they hit you or an image. An image vanishes as soon as it suffers a solid impact. Area effects such as a dragon's breath will cause all images to vanish.

You can spend an action to make one of the duplicates act differently from you and the others, including moving it farther away from you.

You order the targets to open. Locks and shackles are unlocked, clothes and belts come undone, armour falls off. Magical and attended objects are allowed a Save.

Unlike the knock spell, unbuckle is rather inconspicuous. While this means it can be cast stealthily, it also won't help with a stuck door that would be violently flung open by knock.

The target must Save or repeat its last action for the duration of this spell.

You set a flammable object alight with magical blue flames. Magical and attended objects are allowed a Save.

The blue flames behave and spread as normal fire, but they deal cold damage and absorb heat rather than spreading it. They can also burn on water and will happily spread across it, leaving ice behind them.

You take away the ability to fly from all creatures in the affected area. Means of flight both mundane (wings, gas bags, hot air) and magical (including levitation and feather fall) simply fail and the affected creatures plummet to the ground.

You detect the presence of thinking creatures within range.

With 2 [dice], you can spend an action concentrating on a particular thought pattern to learn the surface thoughts of that specific creature. With 3 [dice], this spell affects spirits and undead.

One of your arms turns invisible. Small objects (like a dagger) held in this arm become invisible. The arm can interact with ghosts, pass through walls, etc.

You get an illusory arm on the same side that you can control freely.

You point a finger at the target and they start writhing in unimaginable agony. They spasm until their bones crack and blood gushes from their eyes, ears and nose. Then, their screams become muffled, as they tear their own vocal cords and yet still cannot stop screaming. Eventually, all sounds are drowned by the blood that starts to fill their lungs, suffocating them in between gurgles and red froth. Their ribs were shattered by the convulsions and pierced their lungs, but they will not die of drowning. Instead, with a final spasm, they bend nearly backwards and break their own spine.

The target takes [sum] damage per round and must Save each round to avoid falling prone and loosing their turn.

When you gain this spell and before you can first cast it, you must undergo a ritual where you peel off the skin of your right hand. Your hand will be forever mutilated and slowly seeping blood, but you can use the hand normally, suffer no damage or other negative effects, and risk no injury or infection, even though your hand is missing its skin. 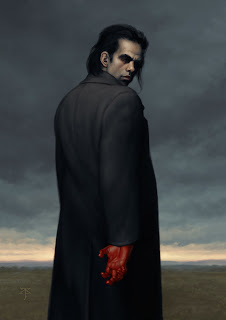 Mishaps:
Dooms:
Your dooms can be avoided by replacing your lost shadow. Either find it and take it back, or steal the shadow of someone else.
Posted by red_kangaroo at 21:32