With the resurgence of the roguelike genre, many of the classics (NetHack, ADOM, Angband) and newcomers (Caves of Qud, TGGW, Golden Krone Hotel) are gaining in popularity and renown. But there are so many hidden gems, obscure roguelikes few people know about and play, even though they would deserve much more attention. Here is one of them.

Recently, I happened to find a browser-based roguelike named Infinite Cave Adventure. I don't know if it was inspired by Colossal Cave Adventure or not, but it claims taking inspiration from NetHack on its RogueBasin page.

It seems to be virtually unknown, as I tried and failed to find some community or further information about it. Still, it's fun to play and has an interesting take on the classic roguelike elements. 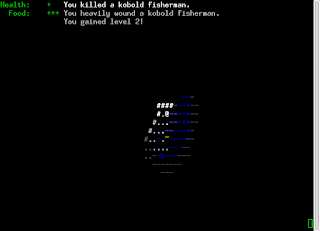 Here's what makes this [roguelike] different:
The idea is to make a roguelike game that is skewed much more towards a board or strategy game than a role-playing game. There's very little role-playing, but a lot of square counting and strategic choice.

I think it succeed in what it aims to do, and manages to be highly (re)playable, even if you have to accept its weirdness. 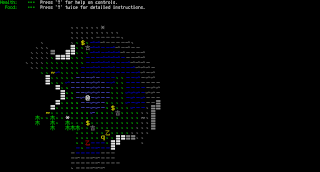 You are thrown into the game with no intro, no explanation. The map is huge and you can't see what you've already explored, so remember it. The exploration itself is really fun, though, as the map generation works well and places enough special features to make the map interesting. Wait for your first drow slaver caravan, or kobold farms.

Everything is deadly. The very first level teaches you this, because you cannot even attack without finding a weapon first, but there are wolves, bears and zombies, all of them capable of killing you with ease. You have to learn to run, and you will run away very often. Later on, you will fight wizards capable of paralysing and poisoning you, drow who summon spiders, or mind flayers with their long-range psychic blasts. Fun all around, I tell you! 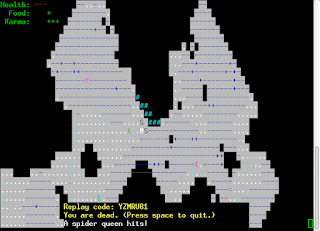 You can only carry one of each type of items (one weapon, one armour, one healing item, ...) and it's not always easy to distinguish what to take and what to leave. The game offers next to no information on anything, which I'd see as a tiny flaw. Some people might enjoy this "fumbling in the darkness" feeling, but given that I'm not given the inventory space and time to experiment, I'd like to know what I'm doing.

And you don't have much time, the food clock really can be brutal. Thankfully, there can be some rare food rations found on the first level, and later levels have kobold farms full of food you can harvest. It's never enough.

However, the items themselves are useful and varied, so you probably have to persist through the period of "I have no clue" until you know what to equip yourself with and which item to use. Try wishing for "dverga-hjaalm", "dverga-skjoeld", "dvergs-oex" and "dverga-hliif", aka the full set of dwarven armour and an axe. Items such as "ring of the sleepless eye", "astral beacon" or "blinking rod" can also help you, and there are many, many more. 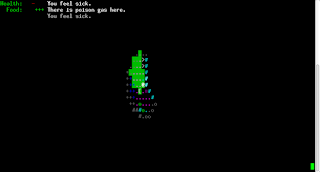 The game has a unique take on multiplayer, which is generally impossible to pull of in a traditional roguelike. In Infinite Cave Adventure, other players can influence your game. You will find graves of dead players and can dig them up for the treasures they died with. Signs left by other players can be read by you, and you can write your own signs by finding a signpost tool and using it. You can dig holes and tunnels, and they will persist for other players. You can even rob the bank accounts of other players, or leave items for them in special safe spots.

I managed to find my own grave once. 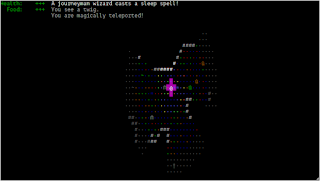 Even the goal of the game is somewhat multiplayer - you are all looking for a Ring of Power, trying to bring it to the Astral Throne. But there is only one Ring of Power in the game, regardless of the number of players. The first one to pick up the Ring will have it until they win, die, or stay idle for several hours. The Ring will also stay where the last player left it, so should someone die halfway to the Astral Throne, you only need to take the Ring the other half of the way to win. Have fun racing your friends. 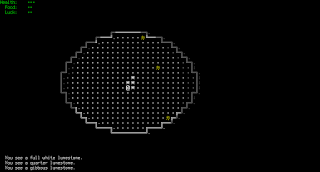 The only strategy that's working for me so far (as in "I don't die immediately") is to explore level 0 until I find a pickaxe, then find a grave with a nice amount of cash inside and dig it up. You have to run from the ghost and try to loose it, but can return for the money later and find stairs or a portable hole to descend to level 1. There you should try to find a Temple of Midas and buy some equipment to live a bit longer. You can even buy a vorpal sword, if you dig up nice enough grave. Oh, and baby kobolds are great for your first kill, but kobold fishermen are too hard to fight without a good armour and weapon. 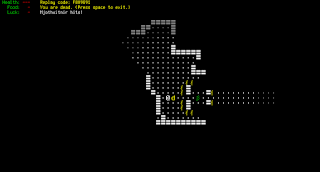 Anyway, you can play it here and here is its GitHub page for anyone interested.

So far, I managed to get down to level 11, while the Ring is (as of the time of writing) at level 17. Given how deadly the lower levels are, we'll see how long until someone can find it and survive.

Happy hacking and don't die!
Posted by red_kangaroo at 15:22