Nothing new from me, but here is what other people have made for the Quarter-Hour of Writing challenge:

Posted by red_kangaroo at 23:09 No comments:

Email ThisBlogThis!Share to TwitterShare to FacebookShare to Pinterest
Labels: QHW

From an Ancient Bestiary

I was going through some boxes in the attic when I found my old school notebook from when I was nine or ten years old. It contains what is probably the first bestiary that I've made, scrawled in between homework. It is... rather silly, really. Apparently I was enamoured with deadly poison and big numbers at the time. And the word "super".

This is no RPG bestiary, mind you. Just some hand-drawn monsters with short descriptions of capabilities. For your enjoyment, I have scanned the pictures and noted some fun facts from the descriptions. Hope you like really shitty art. 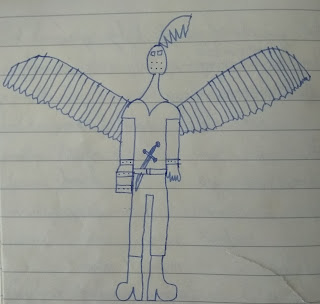 Winged Knight
His right hand has been replaced with a hurricane-strength wind cannon and he is apparently wearing heavy armour, yet he can still fly. His sword is also "super-sharp". 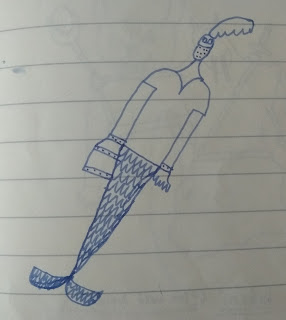 Carp Knight
This one had his right hand replaced with a water cannon capable of cutting steel, his fish-scales are as hard as his armour, and he can swim at a maximum speed of 300 km/h.

They are not present in this bestiary, but I distinctly remember there were more types of these knight, the Knights of the Labyrinth. There were the Four-armed Knights (with two arm-cannons) and the Tentacled Knights (with a normal upper body and a lower body dissolving into a mass of tentacles) and maybe even more that I don't recall. They all hail from the Enchanted Labyrinth, a dungeon that we explored with my brothers before we knew about any RPG rules and systems, using just make believe. 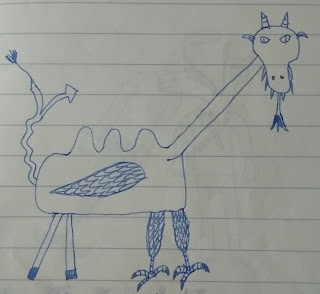 Three-humped Dragon
I like how this dragon is more of a chimera, mixing bits of a camel, hippogriff, goat, lion and an actual dragon. His three humps allow him to survive without food and water for up to three years and he can fly at a top speed of 300 million km/s, which is a thousand times faster than light. It is not written anywhere, but I'd like to imagine that this dragon can survive in the outer space and migrates between solar systems.

He also doesn't breathe fire, but rather shoots lightning from his horns. 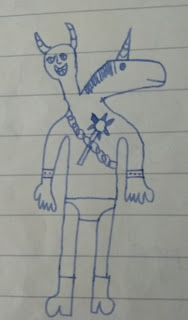 Unicorn Devil
Probably my favourite creature of this bunch, simply because he looks so silly.

The unicorn horn secretes a "super-deadly" poison. I told you it's coming. The devil horns are even stranger, with a note saying they have "magic rope". Can they manifest some animated rope, or what exactly is going on? It's a mystery.

He is also noted as being super strong and tough, wearing no armour and needing none. 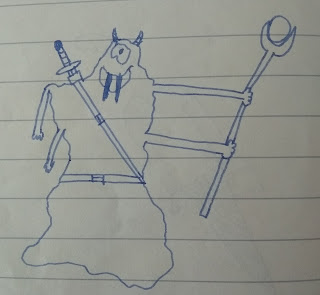 Mud Devil
This is both a devil and an alien, hailing from the solar system of Sirius. His whole body is made of living mud, which lets him pass through cracks or grating. He's also in love with lasers, because both his sword and his staff can shoot lasers. 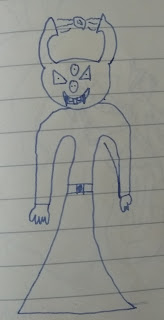 Alien of Jupiter
Or I guess Jovian?

He can fly (presumably via psychic powers) and shoot ball lightning from his antennae (seen in action on the picture). His robe is also indestructible. 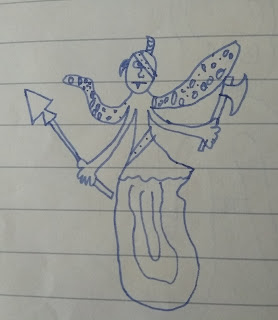 Tiny Ghost-Ghoul
His tentacles have venomous suckers, though not super-deadly this time. However, the weapons are enchanted to kill instantly.

Being a ghost, he can also phase through walls and fly. No information is given on how tiny he truly is, but given that I had once considered it necessary to mention his size, he is probably really small. 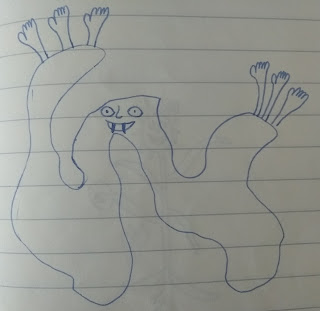 Elastic Ghost-Vampire
Now this one has a fun form of attack. His whole body and all the hands can stretch and twist. He reaches through a wall to grapple a victim, and once the victim is immobilized, bites them and drains their blood. 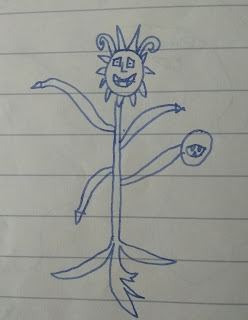 Poison Daisy
Not only does this flower have venomous teeth, she is also thorny with any scratches resulting in an infection. Thankfully, she is rooted in place, so just keep your distance. 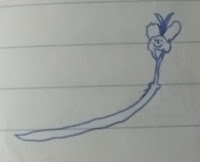 Serpent Sapling
It's a coniferous tree sapling which can slither around on its single overlarge root. It can also shoot needles imbued with super-deadly poison. And it's so small and inconspicuous it can easily hide. Oh joy. 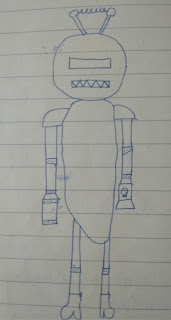 Guardian Robot
I don't know what is he guarding, but he might be better off switching lines of work to a killer robot. His right hand-cannon fires rockets while the left hand-cannon produces a death ray. He can also stomp for a shockwave, shoot lightning bolts from his antenna (Why did I like electrified antennae so much?) and if all that fails, bite off your limbs. His visor pierces invisibility and the material of his body ignores intangibility.

Finally, he can slide out wings and fly, with a maximum speed of 300 million km/s. Now I must imagine a chase scene where this robot is attempting to capture some adventurers riding three-humped dragons, plummeting through outer space at FTL speeds. 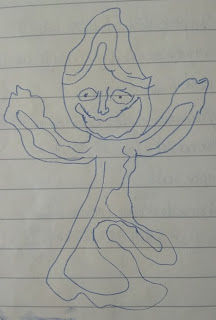 Sunfire Monster
Not much is noted about this creature, except that it attacks with flaming fists that burn with the heat of 11 trillion °C. Funnily, our Sun at its very hottest, in the very core, only has a temperature of 15 million °C.

Oh, and he also ignores cold of up to -100 °C, but given how he would pretty much instantly turn the whole planet into a ball of plasma, that shouldn't be a problem.