There is a world beyond this world. It is just like this world, yet very different. A mirror to our world, if you will. The spirit world. It lies just beyond human perception. It's not hiding - it's everywhere, shading into our world, an inextricable part of natural order that humans cannot see. The cats can, though. Wizards, too. It is called the second sight - seeing the world beyond this one overlap with our reality.

Your mind wanders the spirit world when you sleep and dream, but you can also cross the border between worlds corporeally, if you find the right place. A fairy ring at midnight might be enough, or the right dolmen at the right day of the year. Spells can get you there, or the help of spirits. Deep forests and forgotten mountain caves can hold small crossings. And if you go underground and then further and further until you enter the Veins, the boundary between the worlds starts to crumble and fade. Go deep enough and you won't be able to tell where the real world ends and the spirit world begins. Ghosts walk freely deep underground. 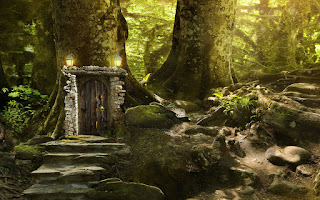 There are pathways and passages in the first Veil that you won't find in the real world. They are usually inconspicuous - a trail lost in the underbush, a door that should not be there, an extra hallway or simply some unnatural way of walking around an old tree. And suddenly you'll find yourself in places that would not fit into the real world. Ball rooms in a tiny cottages. Lost kingdoms and endless forests and beautiful gardens and caves or dungeons or labyrinths. You are in the second Veil. Everything is bigger on the inside. Be careful about the Folk - they can be friendly, fickle, or very, very cruel. The second Veil is theirs.

The third Veil is where reality starts to break. The dreamlands, where imagination and chaos run amok and the resemblance between the real and spirit world is breaking apart. The first two Veils look like magical versions of the real world, but the third one is more of a nightmarish, drug-induced vision. The sky is orange, or it is the sea, or there is no sky, only another forest and then another on top of that. The Moon is a giant skull and a wheel of cheese and a god and a space rock at the same time. Everything is on fire and doesn't burn and there is no such thing as fire. You always take exactly five minutes, three seconds to cross a hallway. The forms of the spirits no longer resemble real world creatures. Gravity may no longer work. Time is strange. Thinking too hard is dangerous, because it may start to change things around you. This is where you go in your dreams, or if you dive from the second Veil.

Everything in the spirit world is made of ectoplasm, except for you if you travelled there physically instead of only with your soul. Ectoplasm is incredible substance, easily shaped and transformed into nearly anything. The rocks, the air, the bodies of spirits or their belongings - all is just a different form of ectoplasm. It is also incredibly malleable with strong thoughts. Given the right conditioning and a strong will, you can ignore the way ectoplasm is and tell it how it should be - temporarily or even permanently changing it to fit your vision.

Your mind can suppress natural laws. Walking through walls requires only a bit of concentration. You will not fall through the ground unless you want to, and even then for only as long as you can concentrate on falling. Or you can stop thinking about gravity and fly in the air. Even the spirits can be moulded into new shapes if you know what you are doing. There is a guild of "plastic surgeon ghosts". Your own soul can be shaped. And while nothing can be created "from the thin air" in the real world, it can in the spirit world, because the air is the very same ectoplasm that will form the new object. All it takes is skill, willpower and imagination.

And while ectoplasm brought to the real world is only half-real, often becoming translucent or intangible, it is most definitely real in the spirit world. If you were to enter the spirit world, ghosts would be fully real and tangible for you. The spirits are normally immaterial, invisible and intangible to the real world when fully within the Veils. But they can cross the border, becoming visible or audible when manifested, which is a part-way between the worlds; or fully tangible once materialized. But that usually takes magic.

The Host of Spirits

Angels and demons are the same, really. Angels of one culture are demons of another. They are shaped by beliefs of people, or by a greater power who needs some servants. They are not black or white, but often have very strange worldview and motivations. But that could be said about nearly any spirit, or even real world people from foreign enough place. They live in various heavens, havens or hells constructed by gods or other powers, or sometimes roam free, trying to escape the regime and servitude.

Souls are the spirits that possess and bond with a living body of creatures, guiding it through life until death. Scholars debate on how many souls exactly you have, or what happens with your different souls after death. But every living creature has some soul, even plants, and some unliving too, through magic or chance. Ghosts are the free souls that once inhabited a body, roaming the spirit world until they reincarnate, change (usually into an angel or a demon, if they were religious and went on for an eternal reward or punishment), or fade away. There are entire empires of the dead in the spirit world. There are also the diseased, mad or maimed souls - various wraiths, spectres and shades.

Elementals are to unliving nature what souls are to the living creatures. The spiritual part of every rock, river or wind. Unlike souls, they tend not to spend most of their time in their worldly shells. It takes them quite some effort to don and move their real world bodies and only magical compulsion or great offense will usually make them. They may be solitary, or gathered in elemental courts in service to one of their more powerful kin, the lesser elemental dragons.

Spells are living creatures. Or spirits, rather. They are spirit animals, ubiquitous and strange and hunted by wizards, who bind them into their spellbooks and then throw them at other people. When you look with second sight at a wizard who casts a spell, you will see the spell sprout from their head - a little finger of death, enraged and running straight for you. Spells can breed, mutate, die, or learn. While many spells start as animals, they can grow in both power and intelligence, especially if they can feed on the thoughts of a wizard. A wish who escapes from the mind of an archmage might be as powerful and smart as a godling.

Folk are probably the closest the spirit world has to a cohesive population. If spells are animals and angels or demons are monsters, then the Folk are humans. They build cities and freeholds, they have complex societies, fey kingdoms and long, convoluted history. They are also weird and not really like humans except for the barest analogy. The Fair Folk are probably the most likely to be met by a human, but the Winter Folk and Mer Folk are plentiful, too. They often war with elves.

Petty gods are powerful spirits of indeterminable origin. Some sprung into existence when they were needed. Some are humans who ascended through concentrated worship. Some are extremely powerful spells or elementals. Archfey of the Folk or various archangels and demon lords could also count. They are all usually lumped together under the label of "god" because it's easier to talk about world-shaking powers when they at least have a common name. They have nothing else in common, though, as each is as unique as their origin stories.

Minor spirits are countless and easily overlooked. They are like insects of the spirit world - found everywhere, but rarely of consequence and effortlessly squashed by any other spirit. Cantrips are the least spells, diminutive parasites latched on the souls of wizards. Disease spirits are barely sentient, let alone sapient spirits that possess living creatures, causing various diseases. Larvae are spirits that were broken, killed and destroyed so many times they lost everything but the primal spark of life that is immortal in all souls. They writhe in the earth of the spirit world like grub.

There are no other Planes; Outer, Elemental or otherwise.
Posted by red_kangaroo at 01:00