NSFW warning.
When I think about sword & sorcery spellcasters, I imagine evil high priests invoking their incomprehensible gods, or mad sorcerers working their cruel rituals. What I don't see is a wizard casting a certain number of fireballs per day. But RPG systems that fashion themselves sword & sorcery, even if they try to emulate that feel of "forbidden knowledge" by making magic more scarce and dangerous, still end up with some variation on wizards casting fireballs.

The only book I can think of (and any recommendations are very much welcome!) that does magic really differently is Carcosa. The system of rituals presented therein is dark, horrible, and really hammers home how unnatural magic is. Even better, the rituals don't need any artificial restrictions on how many you can cast per day, or on which character level. Just getting the necessary resources together is a nice limit on the amount of magic any sorcerer can use.

Carcosa still falls short of what I would think of as an ideal sword & sorcery magic system, though, because of the very limited diversity of presented rituals. I'd like to find a middle ground between only summoning, binding, contacting or banishing otherworldly entities and casting the traditional, simple, boring D&D spells.

Here is an attempt at that, with several nasty but useful rituals.

Once again, there is no limit on how often the sorcerer can use these rituals, the inherent cost and peril should be enough. A ritual is botched if some of its steps are followed incorrectly, or if it's interrupted before completion. 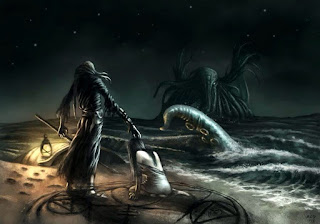 Mother's Daughter
This ritual can only be cast by a female sorceress in the ruins of a destroyed temple, on her birthday. She must kill a male and a female siblings in a sacrifice to Os and Oa, the conjoined demon-gods. If they accept the offering, they will possess the corpses and lie with the sorceress. Nine month later, the sorceress will give birth to a clone of herself, who will grow to a perfect copy of the sorceress in a year and a day, including all knowledge and abilities. A botched ritual will strike the sorceress permanently sterile.

Infallible Messenger
The sorceress must carve the runes of bondage and journeys into the flesh of a child no older than twelve years. She shall then sew their mouth shut and whisper a message into their ear. The child will immediately seek out the recipient, never loosing the path no matter the distance. Until the message is delivered, the child will run faster than a horse and never rest, unable to die from exhaustion, starvation, exposure or injury. The recipient, and only him, may cut the thread sealing the child's lips, hearing the message in the sorceress' own voice. A child enchanted with a botched ritual will, once its lips are parted, scream until it drops dead and everyone nearby lies unconscious and bleeding from their ears.

Slavery of Slime
The target of this ritual must be stripped naked, painted with holy symbols of Juiblex and bound with ropes of Bone Men intestines. They shall then be buried alive in the sands of Nogg, with only a straw for breathing and sustenance. The sorcerer shall feed them with seven types of oozes, slimes and puddings, each for a different day of the week, until two full moons pass. The target may then be dug out, transformed into an utterly loyal sludge vampire. If the ritual is botched, though, the vampire will only feign its loyalty and strike at the sorcerer when he is most vulnerable.

I know I said there are enough summoning rituals already. Oh well.

Blood of the Lamb
The sorcerer shall rape a virgin until they beg for help and mercy, then slit their throat with an obsidian knife while chanting prayers to the Leprous Dweller Below. The victim's blood will be consecrated through agony, despair and lost purity. A single person should then lap up the gushing blood before it stops its flow, healing from all diseases and maladies. A botched ritual will see the victim bleed putrescence instead of blood, transforming into a hostile diseased guardian. 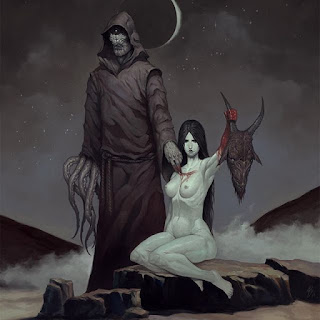 Keel Cleaves the Clouds
The sorceress must mix her own tears with a droplet from the Watery Death and fresh rainwater, then make an Ulfire Woman drink the concoction. After that, the woman may be crucified on the bow of a ship. Until the woman dies, the ship will sail on fog or clouds as if they were water. The woman needs not necessarily die during the ritual, and various invigorating drugs are often provided both to help her survive the ordeal and to extend the effect of the magic. On a botched ritual, the woman will start to vomit prodigious amounts of water immediately after taking the concoction, until she drowns herself.

Invulnerable Hero's Skin
The sorcerer shall flay alive a man of the same race as himself with a severed claw of a byakhee, then wear the skin on his naked body. Care must be taken so that the victim doesn't die, or the spell will end. Any damage that the sorcerer would suffer while he wears the stolen skin is transferred to the victim instead. Obviously, sturdier victims are preferable for this ritual, especially barbarians and fighting-men. A botched ritual will simply result in the death of the flayed man.

Sheathe of Broken Love
The sorceress must plunge a weapon into the heart of a person she truly loves while shouting insults to Yog-Sothoth. Afterwards, for as long as the weapon remain in the corpse and the corpse does not completely rot away, the sorceress may instantly summon the weapon to her hand. It will return back to the corpse once she lets go of it, or once it strikes its target if thrown. If the ritual is botched, it seems to work normally but the sorceress also becomes pregnant* with a spawn of Yog-Sothoth.

Hundred Tongues
This ritual must be performed with a knife blessed by a priest of Nyarlathotep and requires the sorceress to cut out her own tongue, though it may be preserved for later use. She should then cut out the tongue of any human or creature and place it into her mouth. She will be able to speak the native language of the victim. Many sorcerers store hundreds of jars with preserved tongues in their lairs, thus the name of this ritual. A botched ritual will bring permanent muteness to the sorceress.

*) Male sorcerers will be impregnated as well.
Posted by red_kangaroo at 22:47