Encounter Critical is a science fantasy role-playing game designed by Hank Riley and Jim Ireland from Racine, Wisconsin and published in early 1978 by Battle Star Games. When first published, Encounter Critical was unusual for its realistic approach, both for setting and game mechanics. Combat system derived from deep research and actual experience, and the rules were firmly based on the principles of true scientific realism. At the same time it combined two popular settings - fantasy and science fiction - into a single game, allowing the player to choose from multiple character races including Hobling, Frankenstein or Klengon, and from six unique character classes such as Doxy or Psi Witch.

Encounter Critical began as a hoax by S. John Ross of the Cumberland Games & Diversions, posted on-line as a scan of old booklet he "found". It is an affectionate parody of 70s style indie RPGs, a gonzo, funny, slightly insane and surprisingly playable game once you get used to the rules. Mr. Ross later revealed the joke and released the game for free, also gathering quite some fan following in the process. 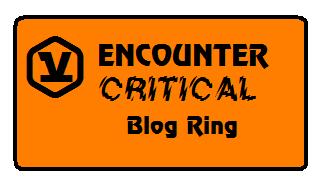 Unfortunately, the official web page is long gone from the face of the Internet and many fan-made resources are also rather hard to find nowadays. Below I've gathered what could be scavenged from the depths of the Internet Archive, for your enjoyment:


In addition, there is a wiki that covers at least the basics of the game, the Lexicon of Vanth that expands on the setting and background information, a very nice automated character generator, a blog ring of various fan blogs, the Phasic Archives that focus on gathering art appropriate for Encounter Critical, and several issues of Phasic Fanzine.
Posted by red_kangaroo at 14:04