Ember Deep is a mind-bending yet curiously traditional* roguelike with deep tactical gameplay. You will travel through time to cooperate with yourself, overcome impossible odds and eventually save your brother from poor planning. Unless the very same kills you first.

It can be played in browser, but for me at least that was really slow. If you download it, however, it runs just fine.


The game looks beautiful - the isometric view, the terrain with animations and different elevation, the music - they just work well together. It somewhat reminds me of HyperRogue, likely because of the strange geometries. In addition to squares and hexes, the game uses warped pentagonal tiles that make for quite unusual aesthetics. They also make for quite unusual movement and positioning, though surprisingly I never found myself disoriented.

The tutorial might have contributed here. Yes, the game has a full-fledged tutorial and even two "challenges" that let you train your time-travelling tactics. And I recommend training for a bit, as the game really doesn't hold back once you start playing for real. You will immediately be swarmed by powerful enemies**. The game gives you the tools to survive, but if you don't know how to use them...


You will find the occasional piece of equipment, like magic staves imbued with spells or new weapons, but that's not the kind of tools I meant. Your biggest asset and the main draw of the game is chronomancy. Time travel is hard to grasp and implement in a game, so of course it's popular for 7DRLs to try. I remember for example Time to Die or The Only Shadow That the Desert Knows*** from previous years, and they each had a unique take on the player manipulating time. And no, I don't think the time-related abilities in ToME4 or Caves of Qud really count.

Anyway, Ember Deep gives you the power to rewind time. And there is no cost or limit to it, you are limited only by your own tactical acumen. And by the presence of your own time-clones, I guess, as you might end up with a crowd of yourselves that makes it hard to navigate the narrow passages. Remember how I mentioned poor planning? I often trap myself with time-clones, leaving me no escape route from the monsters. The other times, I die because I forgot to place a time anchor and now my situation is already beyond screwed. (Un)surprisingly, you need a lot of foresight for time travel. 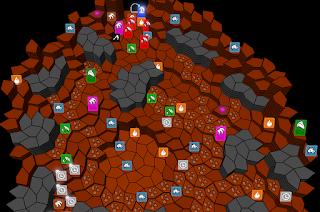 Basically, you can place time anchors and "pre-record" your actions, then jump back in time and do something else, as many times as you wish. Even your other abilities complement and encourage time-travelling shenanigans, like Defy that makes you stand your ground, decreasing the damage taken and drawing aggro. You can make several scapegoats from your past selves and then slip by the monster hoard, or outflank the monster focused on your defiant self with several other selves and beat it to pulp. It's weird and entertaining and engaging, and the changing grids make it all that much more cool.

All in all, it's wonderful to see that the dev managed to balance unlimited time travel in a way that leaves the game a challenge. Contributing to that, of course, are the monsters. Each of them is different in a way, with varied behaviour and abilities. While you can slaughter some of the weaker enemies with nothing but careful positioning, you will soon encounter beasts like the ravagian trask, who is nigh unbeatable without chronomancy tricks. Then you descend another level and chronolisks will start to use some form of chronomancy against you - don't ask me how that works, my head hurts just thinking about it. And there are other monsters I know nothing about, as I just cut my losses and legged it out of there when they showed up, leaving my past selves to deal with them.


BTW, there were some bugs and exploits, but the dev is already working on fixing them. I'm glad I could make the game harder for you all. :) I should also mention that the dev requested this mini-review, and now it's getting longer than any of my previous ones, so here is a TLDR:

It's a good game, very good one. I hope to see more of it. 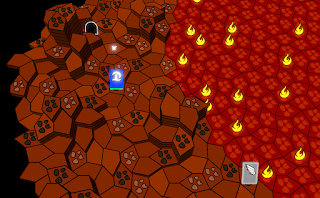