Chess is a multiversal constant. Everywhere there is an intelligent life form capable of crafting a chequered board of two alternating colours and a set of playing pieces, a variant of chess will sooner or later arise. Scholars might mark this phenomenon a case of convergent evolution, but it could as well be a mathematical inevitability, or a silly joke of some obscure godling.
This is one of the many variants of chess displayed in the Black and White Hall of the Magpie Museum in Tam Ruat. 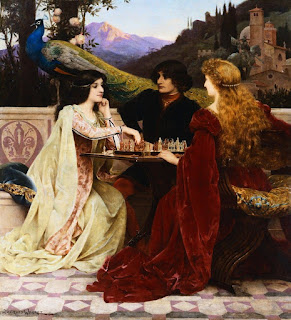 This variant of chess is played on a board of 12x12 black and white squares:

Pieces that "jump" can move over other pieces rather than being blocked by them. In normal chess, the only jumping piece is a knight, but there are several more in Tam Ruat variant.

Barbarian (b)
Barbarian moves one square diagonally forward to the right or left, but captures by advancing one square; like an inverted pawn. Similarly to a pawn, a barbarian cannot move backwards, can move two squares on its first move, can capture en passant, and can be promoted if it reaches the opposite side of the board.

Chariot (C)
Chariot is the same as a rook in normal chess.

Cleric (c)
Cleric is the same as a bishop in normal chess.

Ghost (g)
Ghost does not start on the board, but instead can be summoned whenever a warlock (see below) captures a piece. The ghost then appears on the square of the captured piece. Each player has two ghost pieces, but if a ghost is captured, it can be re-summoned again.

Ghost moves similarly to a grasshopper, so it can jump any distance orthogonally or diagonally, but only over another piece, landing in the square immediately after that piece. It may jump over pieces of either colour, but only captures if the square beyond the jumped-over piece is occupied by a piece of the opposing colour. Ghost cannot move if there is no piece to jump over.

King (K)
King is the same as in normal chess. Additionally, a king who reaches the opposite side of the board is promoted to an emperor, who moves similarly to a queen except it still cannot check.

Knight (k)
Knight is the same as in normal chess.

Paladin (P)
Paladin moves as a combination of wazir and alfil. Thus, it either moves one square orthogonally, or jumps two squares diagonally.

Queen (Q)
Queen is the same as in normal chess.

Warrior (w)
Warrior is the same as a pawn in normal chess.

Wizard (X)
Wizard can use the moves of ferz, camel and dabbaba. It can jump either one square diagonally, or two squares orthogonally, or in an elongated knight's move - one, then three squares (aka "1-3 leaper" move). It is, however, colour-locked.

All rules of normal chess apply, excepting the few changes below.

Castling does not exist, as the bigger board would make it harder to execute yet very powerful for moving the king to safety.

Promotion of barbarians and warriors can only be done into pieces that their player has lost - ie. when promoting, you select one of your captured pieces to resurrect in place of the barbarian or warrior, not any piece you would like. This prevents the player from getting several queens, but thanks to the number of new pieces with unique move sets also brings some nice tactical decisions.

The player that bares the opponent's king wins without the need for a checkmate. Given the existence of the emperor piece, too many games could end with tedious chasing after the highly mobile emperor.
Posted by red_kangaroo at 10:27

Email ThisBlogThis!Share to TwitterShare to FacebookShare to Pinterest
Labels: board games, rules