I'm still here, real life has just been a bit demanding lately. Now that I do have some time again, I've started reading the Dresden Files and immediately, there's a game-able idea in there. The potion-making in the books would make a nice ad hoc alchemy system for player-made potions. 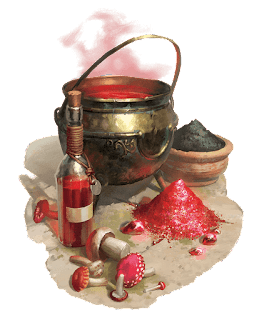 You also need a cauldron.

The ingredients do not need to be expensive or magical of themselves. They form a symbolic medium that is then filled with magic through the ritualistic alchemical process, influenced by the alchemist's intentions. Except for the alchemical base, they also need not be physical. If you wish to add moonlight, for example, you can brew outside on a clear night, or when you need a child's first cry, get yourself a woman in labour.

Therefore, there are no set recipes for potions. Each part should symbolize the required outcome, but things with similar symbolism are interchangeable. The players should think about the effect they want their potion to accomplish, and then justify the ingredients they are using to the GM. If the ingredients make a lot of sense/are funny or clever/are expensive or rare, the potion will be more potent.

Brewing a potion always takes several hours* of stirring the cauldron, keeping the fire properly lit and mumbling arcane phrases from old books. It's a ritual, the alchemist cannot just let it bubble and go do something else. Afterwards, no matter the ingredients used, everything will have melted and mixed together into a smooth potion. The potion will also be safe to drink, no matter the ingredients used.

Potions do not have a long shelf life, they go bad after a day and a night. Brewing permanently potent potions takes a month, expensive ingredients, an alchemical lab built over a ley line, and in general should be left to the NPCs.

Drinking a stale potion is a VERY BAD IDEA. Drinking a potion while still under the influence of another is slightly less bad idea. 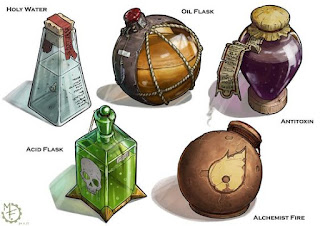 Here are several example recipes from the Dresden Files:

*) One watch, just like foraging for food or setting up a camp would take. The time doesn't change if you're making more than one dose, you just need a bigger cauldron and more of the ingredients.

***) If you like something else for breakfast, you would use that instead.