He was a titan. He was a god. He was struck down by his brethren and trapped in these unhallowed halls. He was drawn and quartered and tortured and butchered and eventually, more or less, killed. 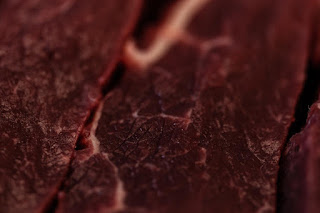 His meat and fat was cooked and devoured in the greatest feast this place has ever seen. Many a strange creature participated in the unlikely peace of this feast, all forever bound by a profound sense of fellowship. Those who tasted his flesh may always request a parley with one another.

His right hand has never stopped moving, and was stolen before the great feast was over. It now resides in the Endless Archives, tended to by the Archivist Monks who provide it with ink and papyrus, and study its scrolls of knowledge and foreknowledge.

His left hand was taken by Wlchzmlk the Cripple Queen. She later became known as She-Who-Touched-The-Sun, after she managed to escape this underworld and reach the mythical surface world so far, far above. Of course she eventually returned, as all wayfaring, wayward denizens do.

His legs were gobbled up by K'irssa and H'yshra, two Sisters of the Worm. For their gluttony, they were imprisoned in hanging cages where the Worm cannot free them. He is sure to reward anyone who would bring his Sisters back.

His skull and ribcage used to be worn as an armour by Umm Burhyaa Ra'ar al-Muscati, the Lichloved. Since her peaceful death, they have been interred in her tomb, along with other treasures beyond belief and an army of husbands and slaves.

His brain was sold to the dErO, who made it the core of their thinking machine. Any psychic can reach through the machine to all others. In fact, the dErO insist you do so. Yes, you!

His right eye was given to the nameless beholder, to quell his rage after he lost his central eye in a failed assassination attempt. It doesn't negate magic, it bends and warps and empowers it.

His left eye was swallowed by a fungal ambassodile for safekeeping. No one has yet acquired the proper deed to collect it.

His third eye has escaped and evades capture to this day, wandering the tunnels and mazes aimlessly, or maybe with an inscrutable goal.

His teeth were made into 47 daggers for the 47 name-thieves, each inscribed with the true name of its wielder.

His tongue was gifted to the golem lord Faragó Nándor, bringing back his eloquence lost in an unfortunate deal years before.

His lungs were claimed by the Bodhisattva of the Third and Seventh Winds, for purposes unknown. His meditations are not to be disturbed.

His stomach was eventually acquired by the Guild of Biomancers, who use it to brew their many drugs and draughts. Ask your local vendor!

His liver was personally prepared by the divine chef Palxaochitli and shall be served only to the champion of the Night Games. The meal is as of yet unclaimed.

His spleen was eaten by an unknown adventurer, yet it proved too powerful for her feeble frame. It gave her immortality in exchange for her sanity, and still sits undigested in her stomach, wherever she might be.

His kidneys were saved for the engagement banquet of Lord Eldar and Lady Aerith. Two stones were found in the kidneys and set into rings of orichalcum, then exchanged at their wedding. No elf can refuse an order given by a wearer of one of those rings.

His bladder was crafted into a hot air balloon by the dwarven brothers Urist and Cog, another of their many ill-fated attempts to escape the underworld.

Many an attempt was made to eat his pancreas, yet everyone failed, as those who take a single bite loose both their desire and need for nutrition, forthwith and forever. What might result from somebody eating more than a mouthful is the subject of much debate and speculation. Lately, baron Von Totenkopf led a successful heist and absconded with the pancreas. He is presumably hiding in the ghoul quarters, the bounty on his head ever-rising.

His skin was flayed, stretched and dried into a parchment, then scribed with all the curses he uttered with his dying breath and bound into a book of horrid magics.

His hair were burnt as an offering to Os and Oa, the conjoined demon-gods. If any bits of his hair were found to still remain, burning them might bring a blessing of the demon-gods.

His intestines were used to bind Yog-yiacarhu, Who-Lurks-In-Corners, and were the first thing to ever pin xyr in place. Unfortunately, many lengths of the intestines were since stolen from xyrs prison, and xe may very well tear free, should even one more loop be removed.

His penis was won in a bet by Barad the Bawdy, a party animal* extraordinaire. It became the pride of his collection of curios and memorabilia, after he realized that getting it grafted on is unfeasible. Barad loves to tell this anecdote to all his party guests, and those that don't laugh tend to become a part of the menu.

His testicles were seized by the Dark and used to breed all manner of Darkspawn. Anyone can challenge the Dark for the ownership of the testicles, but nobody yet dared and lived.

His scrotum was made into a sack, said to bring back to life anything dead placed inside. It is rumoured to be among the possessions of the Last Holy Priest.

His heart has been fed nectar and ambrosia, growing ever mightier and more humongous. When you press your ear to any piping, you can hear its distant beating as it pumps water and oil and blood and steam and sewage throughout the whole dungeon.

His soul has been trapped in a machine of black iron, its main chakras pierced by seven lances of magical metals. They focus his boundless pain and burning hatred, channel them into a heat exchanger to generate steam for heating the dungeon and powering its many traps and lifts and subsystems.

His blood, sweat, tears, lymph, urine, semen, cerebrospinal fluid and snot were preserved and portioned into countless vials. Each of the liquids is ascribed a plethora of beneficial properties, and any remaining vials might fetch a high price from the right buyer.

His cerumen was made into nine times nine foul candles. Lighting one produces horrid screeching and ringing that drowns out all other sounds and prevents concentration of anyone nearby. Longer exposure results in lasting tinnitus, severe migraines, and finally madness.

The leftovers were fed to the rats. None can say for sure, but it might have spurred the sudden and rapid development and procreation of ratlings, making them the nuisance they are today.

Everyone knows he is not dead, just biding his time. Maybe the prison of his soul will be damaged, and he will pull his body back together. Maybe some fool will consume enough of his corporeal remains to inherit his spirit, as well. The question is when, not if.

He is still a god, after all.