May the War never return.
- Motto of the Order of the Shadow


There is a fragile balance between Light and Dark, ever since the War. Light technically lost, and the conditions of surrender dictate that Dark has the authority to oversee and control the actions of Light to prevent any future conflict. Shadow wizards are the secret police tasked with this responsibility.

Of course, the situation is not that simple. Light, naturally, despises the constant surveillance and infringement of autonomy. Dark is paranoid about terrorism or war training on the side of Light. Neither could afford another war. Thus, shadow wizards serve more as mediators, diplomats, and guardians of peace. But they are always ready for trouble and when the situation calls, they may easily be spies, jailers, or executioners.

You are an Outsider.

You can speak with shadows. Shadows are playful, a bit childish and generally friendly. They also love riddles and constantly talk over each other. When speaking with shadows, they will cling to you in wispy strands of darkness, which can look quite suspicious.

You cannot cast spells in total darkness or bright light (torchlight or indirect sunlight are fine). 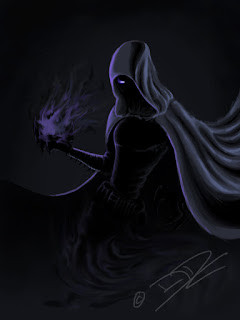 The target object shines as a torch, or stronger with more [dice].

Alternatively, you can make an Attack roll against a sighted creature. If you succeed, the creature is blinded for [sum] rounds. If [sum] is 12 or greater, the creature is permanently blinded.

You can chose the colour of the light. With 4 [dice], the light may have all the qualities of natural sunlight, or you can create pure octarine (though that will only last for 1 round). Octarine light is extremely dangerous.

Beware that if you conjure a light too bright, it may prevent you from casting unless you can shield yourself from it.

Darkness descend upon a sphere of [dice] x 10' radius at a point you designate. It drowns most light sources but can be dissolved by very strong light.

You may also pick one of the following options for each [die] invested after the first:

You release a torrent of sharpened shadows and the target takes [sum] + [dice] damage, no Save.

The target takes damage as if unaware if their shadow is attacked.

Shadows shroud you. Select [dice] senses. You cannot be perceived with these senses.

Edit: I finally got around to fix this spell. It used to read: "You gain +3 to Stealth for each [die] invested.", and it was boring. Now it has both obvious (invisibility) and niche (immunity to telepathy) uses.

You can see perfectly in shadows and even total darkness, but bright light may blind you.

Control the illumination within range.

With 1 [die], you can make shadows darker or lighter, bend, twist and shape them, dim light sources, or move areas of darkness. Each [dice] invested increases your power and precision.

The target takes [sum] Charisma damage as you infuse their soul with shadows. The target's shadow also becomes distorted, warped, monstrous, and eventually tentacled. It returns to normal as the Cha damage heals.

If this spell reduces the target to 0 Cha, they retain their mutated shadow permanently. They also become murderous psychopaths, preferably targeting their former allies. They will not harm any shadow wizard, though.

You drive a "shadow nail" (which may be anything sharp enough to stab into the ground) into the shadow of a creature or object, trapping them in place. You can use the shadow nail from any appropriate range; for example a sword would probably need to be used up close, but an arrow may be shot into the shadow with an Attack roll. The trapped creature or object can only move in such a way that their shadow never leaves the shadow nail, and they will be thrown around if sudden lighting change causes their shadow to jerk.

All shadows in the target area become [sum]' deep pools of shadow-stuff. The shadow-stuff behaves a bit like quicksand, but can be breathed normally.

I'd say anyone trapped within the shadows when the spell expires will disappear and later wander back from a random shadow.

You may access [dice] extra inventory slots by inserting the items you wish to store into any shadow. The stored items are undetectable and none of their harmful effects affect you. As the spell expires, any items still stored will be found in a nearby shadow.

You link two shadows you can see into a portal.

You close your eyes in concentration and let your consciousness flow into your shadow. As your helpless body remains standing behind, you grow your shadow into a massive monster of darkness and unstoppable rage.

You can move anywhere within range centred around your real body. You are an avatar of death and dread, and cannot do anything defensive, curative, or tactical with your allies. You cannot dismiss the spell until you kill, subdue, or drive off all enemies. If one of your allies has injured you this fight, they count as an enemy.

If you angered Light, it will burn your eyes. You have to protect your sight from light, or suffer disadvantage on all rolls. If you angered Dark, it will whisper terrible threats to you. You have to Save vs Fear when in darkness (though darkvision helps). Creatures of Light and Dark will likewise be hostile to you.

You may avoid you final Doom by having your shadow secured in place (preferably with shadow nail) when you trigger the Doom. Alternately, should you defeat your shadow, it will return meekly to you.

As your shadow escapes, it will take your magic, so you will loose your spellcasting until you can reclaim your shadow. Your shadow has the same HD as you, and all your spells at its disposal. However, your shadow is impotent in total darkness, and even though you will still feel its touch and hear its whispers, it cannot harm you. Additionally, bright light will send it on a scrambling retreat.

You may also steal the shadow of someone else to regain your spellcasting without defeating your shadow.


The War will never return. The price is irrelevant.
- Common saying among the shadow wizards