I'm backdating this to make it the first IVAN post, because IVAN deserves an explanatory first post.


A dank tunnel runs beneath the ocean, connecting the village of New Attnam with the continent. In the lowest level of this passage dwells a massive, carnivorous plant that has claimed dozens of my adventurers. But I was ready for it this time, armed with axe and wand, with my trusty puppy at my side. The battle was fierce, and the beast succeeded in biting off one of my legs which made escape impossible. I fought on until I lost my axe arm as well, and in a panic I blasted the thing with a wand of acid rain. The spell worked and fatally burned the arboreal nightmare, but casting it so close splashed acid on me as well, melting my remaining arm and leg. I laid there on the cold, bloody stone, helpless but pleased with my victory. My puppy decided to celebrate by feasting on the fruit dropped by the dead plant, brushing past me and nudging my torso into a shallow pool of acid. My head quickly dissolved, leaving my companion masterless. 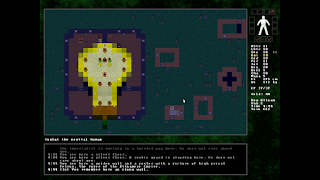 It's an abbreviation of Iter Vehemens ad Necem, or Violent Road to Death. It's a graphical roguelike and a really good game. It's the first roguelike I played, the one that hooked me up to the genre, the one that eventually made me learn programming.

As a part of the current dev team, bear in mind that I might be a bit biased when talking about this game. But really, you should drop everything and go play it now. :P


And what is so special about IVAN?

Well, it was a graphical roguelike before it was cool. There are probably more tile-based roguelikes than ASCII ones today, but back in 2001 when the first public release of IVAN came out, it was something unusual. It wasn't the first graphical roguelike, but it also does way more than only show you basic, static tiles.

Its graphics serve it well especially together with its other great feature: IVAN has a body part system that allows for localized damage. Remember Monty Python and the Holy Grail? That black knight fight? Exactly.


After you find a good weapon, you will be able to reduce monsters to helpless torsos by mutilating them frivolously! The game rewards brutality by showing its results in detail. You can track a wounded and panicked monster by its trail of blood. Limbs will go flying, blood will be splattered all around, you will see the missing limbs on your foes. Besides that, you'll face animated monsters and terrain, flames, smoke and weather effects, and even dynamic lighting system that can beautifully mix coloured light. 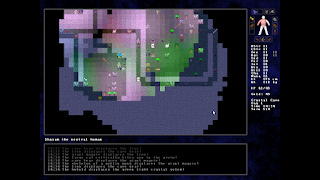 But never forget that IVAN will be brutal to you, too. The game will happily show you the blood flowing from your veins, or the limbs you are suddenly missing. It's best to have a remedy available in such a case, and remedies there are! You can have your lost limbs stitched back on, regenerate them with potions, or pray to have them replaced with different limbs. Yes, the gods of IVAN can grant you an unconventional boon in the form of a golem-like, artificial limbs made of nearly any material imaginable. Which brings us to another feature: the materials.

Unlike most other roguelikes, IVAN defines only generic item shape and use, and all other stats of an item are determined by its material. There are hundreds of materials, and all combinations are possible. Of course, you will not find a longsword made of bread - but if you wish to, you can use magic to make one. Bread sword might not make the best weapon (unless highly enchanted), but it can be eaten as a cool snack. 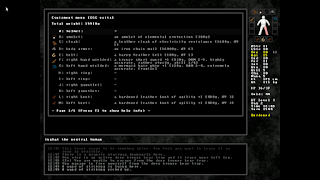 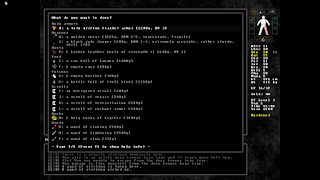 Even without such frivolities, you can have equipment made of bronze, iron, meteoric steel, mithril, orichalcum, mahogany, chitin, petrified dragon bones, spider silk, phoenix feather, primordial ice, and so much more. Magic can be used to harden, or completely change the material of your gear. And besides allowing you to upgrade your equipment in a unique way, the material system makes it possible for the game to easily generate lots of different objects for your use and amusement.

So be goofy or inventive - the game gives you tools for it all.


But there is more. IVAN has significant worldbuilding hidden in the conversations you can have with nearly any creature you will run into. Talk to them and they will tell you stories, jokes, or hints and useful advice.

It has multiple locations and two mutually exclusive main quests you can pick from, along with several sidequests and optional areas and bosses. It has seven different victories, so don't expect to truly finish the game any time soon.

It has a lot of hidden surprises and a (blackish) humour that is very close to my heart. It also has a great community.


Iter Vehemens ad Necem is a very deep, very difficult game, but the brutal difficulty makes it so much more rewarding to actually make progress. It will take you a while before you achieve a victory, and I don't think you'll ever stop finding new things in the game. Especially because we still actively develop it, so there is something new every few months.


Oh, and before I forget, there is a dedicated forum for IVAN, a GitHub page with releases, a TV Tropes page, and of course a wiki.