I Finished My First 7DRL

Endless Descent Into the Dark and Dangerous Dungeons of the Most Reprehensible Alphabetical Overlord: Quest for Gore and Vengeance is my contribution to the Seven Day Roguelike Challenge 2019, and also the first 7DRL I made. It is a simple, silly terminal-based roguelike where you slay letters and try not to get swarmed to death.

It can be found here. Windows release will be added once I persuade mingw to cooperate with ncurses. 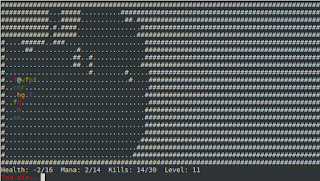 Descend into the terrific - no, wait - terrifying Vault of Writing and use your ancient sword and mighty magic to avenge your beloved potted plant and destroy the Dark Alphabetical Overlord. You will probably just die, though... 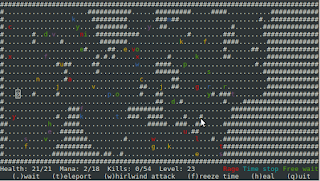 I wanted to finally take part in 7DRL this year, but come this Tuesday, I didn't have any good idea for a game and knew I won't have much time anyway. I also never worked with ncurses, so this game became a little experiment in what can I learn in the time I had available.

It actually turned out quite well, if I may say so. The player is given several spells to work with against the hordes of enemies, and because you only gain mana by killing monsters, you will have to be clever and use the spell wisely to survive. Monsters have multiple special attacks, but they are dumb by design to prevent them from easily swarming you to death. I rather like the gameplay, and hopefully you will too. 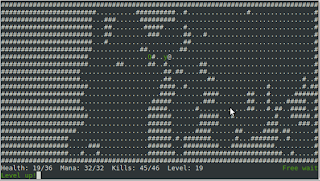